We are very pleased to offer by Private Sale a selection of early works from a large collection in the United Kingdom. These paintings were created between 2001 and 2011 by some of the finest and most important early artists from leading central and western desert Aboriginal-owned art centres. Below is some brief biographical information on the artists. We'd be very happy to provide you with more details and images on request.

Maringka Baker (b. 1952) is one of Tjungu Palya's leading women artists. She is esteemed for her beautiful compositions, with her red paintings being the most highly demanded. Maringka’s main theme is the Minyma Kutjara tjukurpa (Two Sisters). She is represented in many public museums around Australia and has regularly exhibited internationally.

Tiger Palpatja (1920 - 2012) is considered to be one of the most important early artists of the APY Lands movement. He began his painting career at Tjala Arts (then Minymaku Arts) and spent some time also painting at Tjungu Palya in the last couple of years of his life. His main story was the Wanampi tjukurpa, which is connected to Piltati. He was one of the senior custodians for this story. His works are well represented in public collections across Australia.

Pungkai (Pungkai Bertani) (1958 - 2017) was a Nyoongar/Pitjantjara man who began his painting career at Tjungu Palya around 2006. He received his name Pungkai from his adoptive mother, Eileen Stevens, a master painter. Pungkai’s paintings reflect his cultural roots, with his main themes being My Nyoongar Beginnings, Piltati, Tali Tjuta, and Wind. His works are held in public and corporate collections.

Angampa Martin (b. 1940 - unknown) was one of the founding painters of the former Irrunytju Arts centre in Western Australia. She is known for her bold, dynamic style. Her main themes are Wati Kutjara (Two Men) and Minyma Kutjara (Two Sisters). She is represented in public and private collections.

Judy Napangardi Watson (1925 – 2016) is one of the most famous painters from Warlukurlangu Artists at Yuendumu, west of Alice Springs. One of her major themes was the Mina Mina story about gathering food. Her distinctive style is highly sought after, and her works are represented in many national and State public collections.

Carol Maayatja Golding (1932 – 2016) was one of the leading early painters at Warakurna Artists, starting her career in 2005. Her style is characterised by several layers of loose dotting which she used to obscure the sacred/secret areas of the story. Golding is represented in several national and State public museums.

Nyankulya Watson (1938 – 2012) started her career at the former Irruntju Arts, then moved to Ninuku Arts and Tjungu Palya. One of her works was made into a tapestry for the Australian Embassy in Rome by the Victorian Tapestry Workshop. Watson’s work is widely represented in public collections around Australia.

Doris Elkedra Apetyarr (b. 1954) is one of the earliest members of Artists of Ampilatwatja, north east of Alice Springs. She has a profound knowledge of bush medicine and her traditional country, which is reflected in her very finely executed paintings.

Daisy Moss Akemarr (b. 1943) is a long-standing member of Artists of Ampilatwatja. She was one of the original artists working on the Utopia silk batik project that started in the late 1970s, along with Emily Kame Kngwarreye.

Pulpurru Davis (b. 1943) is a senior artist from Kayili Artists who started painting in around 1990. During her career she has exhibited widely, including overseas. Her work often refers to traditional hairstring bands and the sites of Mina Mina and Lirrillili in Western Australia. She is widely represented in public and major private collections.

Tjunka Lewis (1927 – 2012) was one of Warakurna Aritsts’ most senior male painters. Originally from Blackstone, WA, he worked for a while at Papulankutja Artists, where he was a renowned carver. He was a very traditional man. He started painting for Warakurna Artists when he moved into aged care. His severe arthritis and frail health curtailed his ability to paint large-scale works, with many being done in bed. Lewis’ nephew was Tommy Mitchell. His work is represented in public and private collections.

Elaine Warnatjura Lane (b. 1940) started her career in the mid 1990s as a weaver at Papulankutja Artists, where she achieved recognition for her talents. She started painting more regularly from the early 2000s. Her joyous, colourful works often contain figurative elements and are popular with collectors. Lane now works predominantly through Warakurna Artists.

Winston Mitchell (b. 1952) is a senior, traditional man from Papulankutja Artists and is a contemporary of the late Cliff Reid. As is typical of very traditional bush men, Mitchell provides few details about the stories behind his paintings due to their highly sacred/secret nature.

Angilya Mitchell (b. 1953), like many of Blackstone women of her generation, started as a fibre artist in the early 1990s before moving into painting for Papulankutja Artists. Her first recorded painting was in 1994. Mitchell was one of the artists involved in creating the famous woven grass “Toyota” sculpture that won the 2005 National Aboriginal and Torres Strait Islander Art Awards. Another of her grass sculptures was included in the 2018 National Museum of Australia’s Songlines exhibitions. One of her main themes is the Seven Sisters story.

Jean Inyalangka Burke (1945 - 2013) was one of the founding artists of the former Irrunytju Arts. Apart from her painting, she was a highly regarded weaver who has passed on her skills to the younger generations. Born in the bush, her works reflect her deep cultural knowledge. In later years she worked at Warakurna Artists where she was involved in the large History Paintings project which was acquired by the National Museum of Australia. 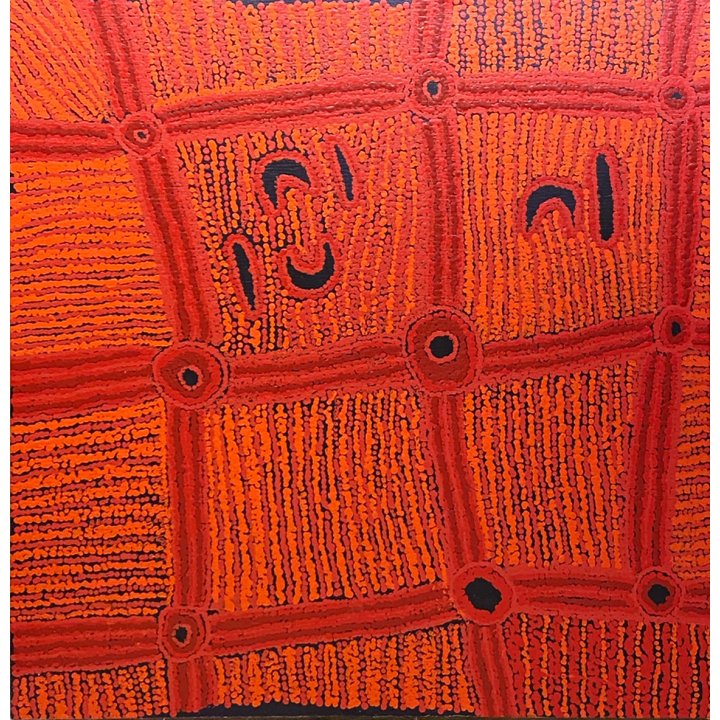 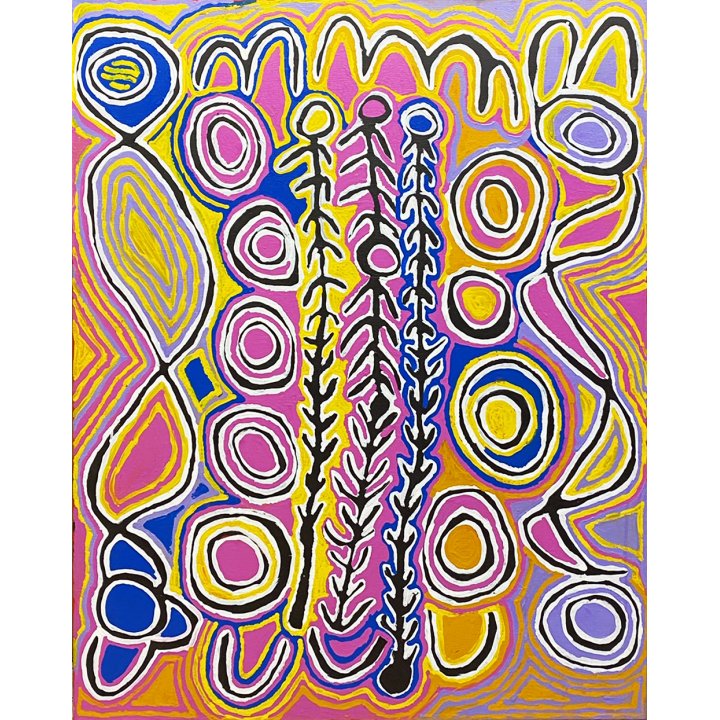 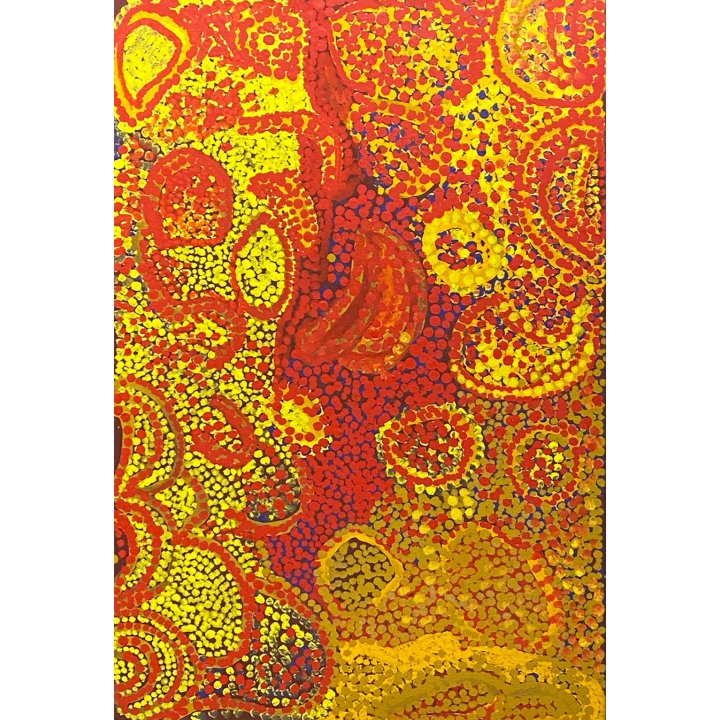 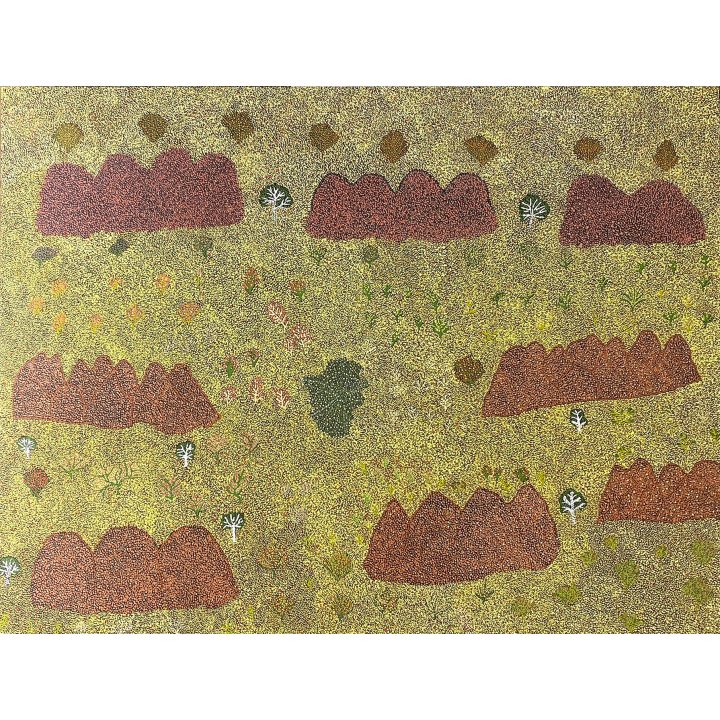 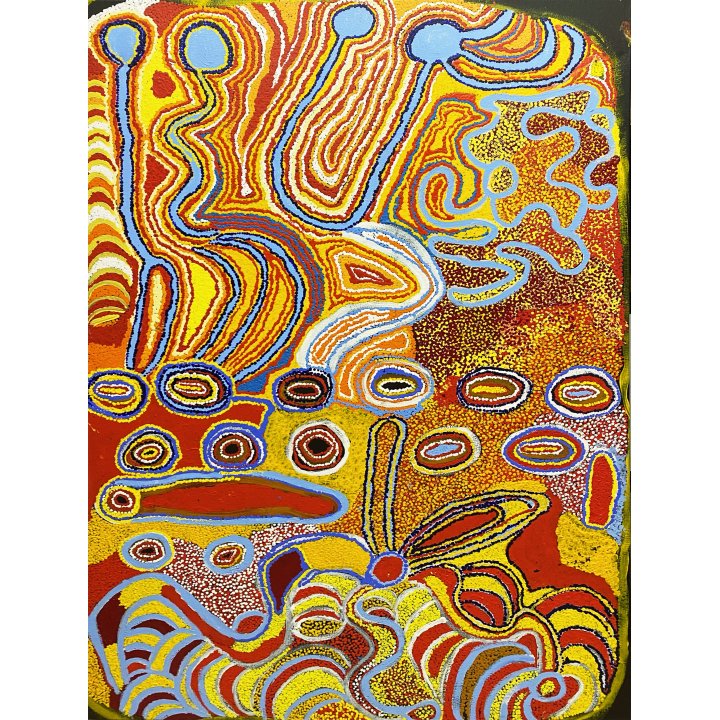 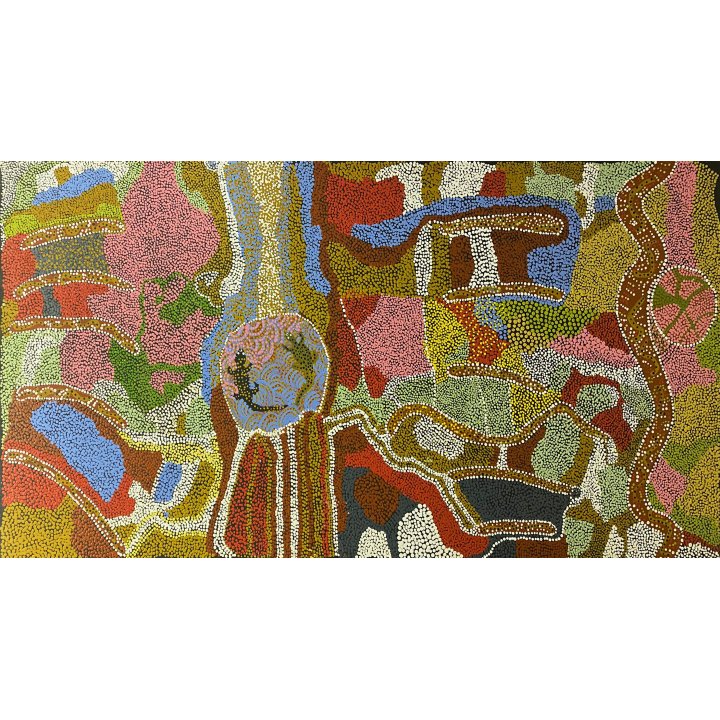 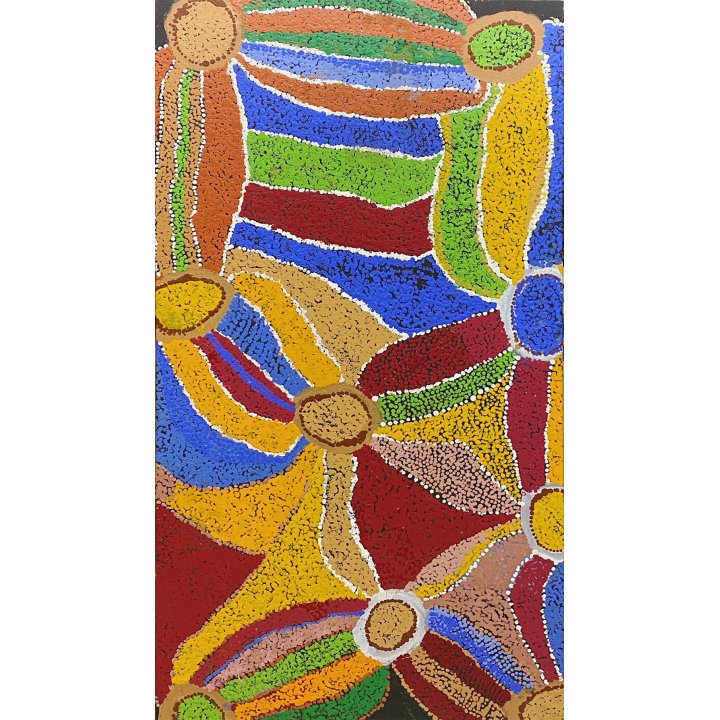 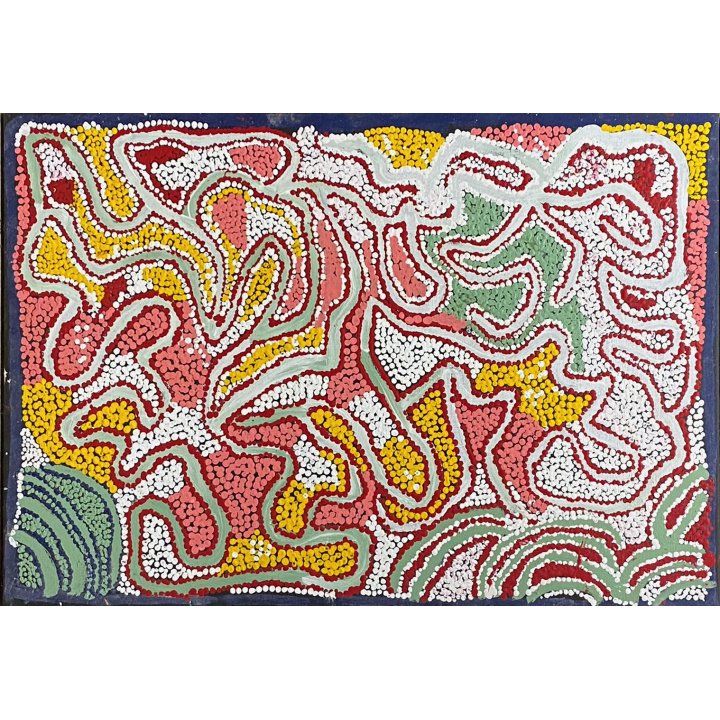 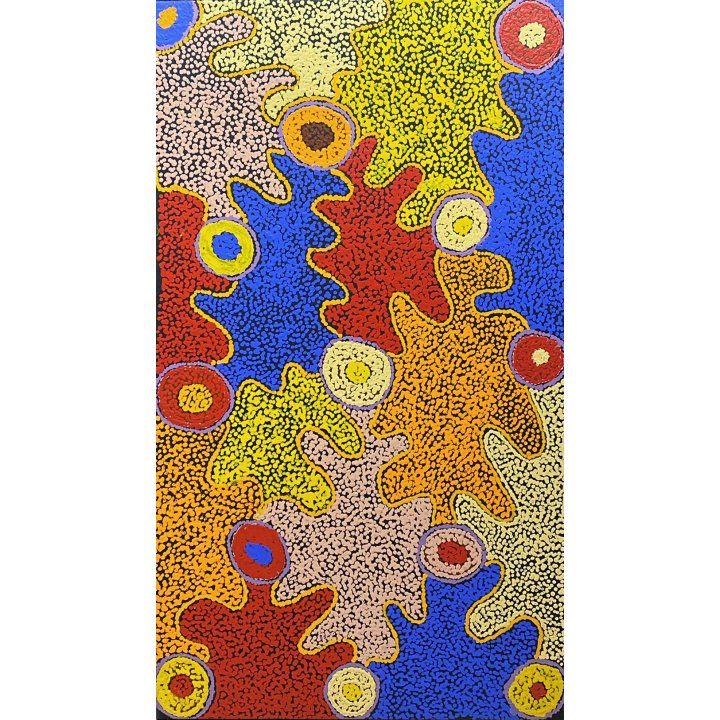 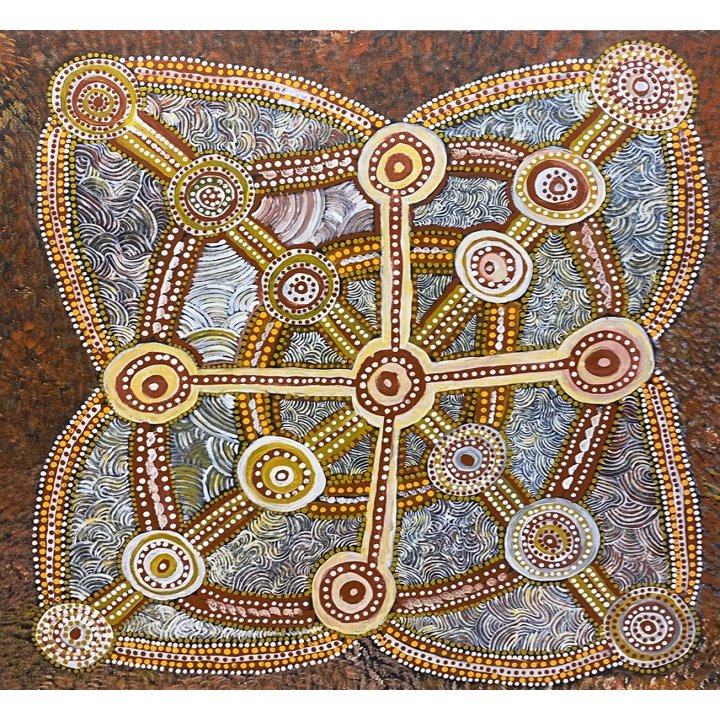 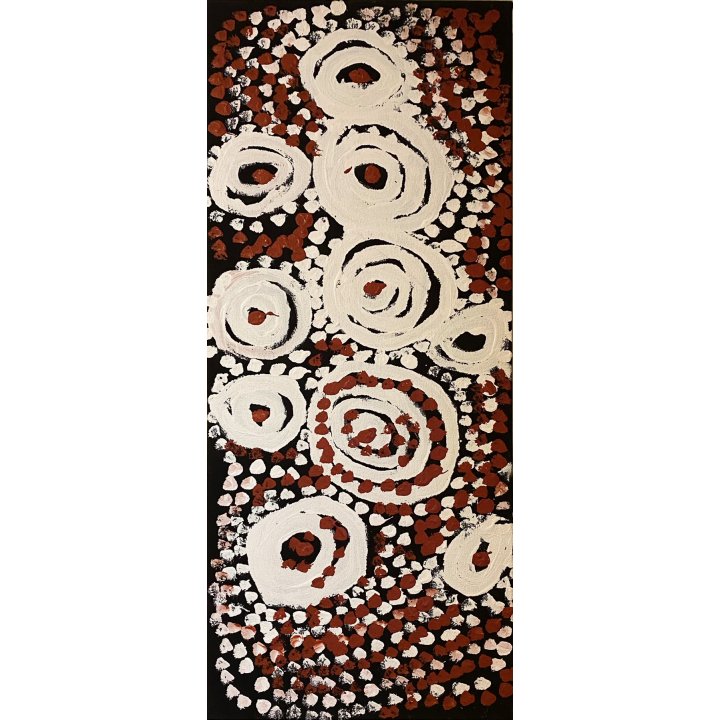 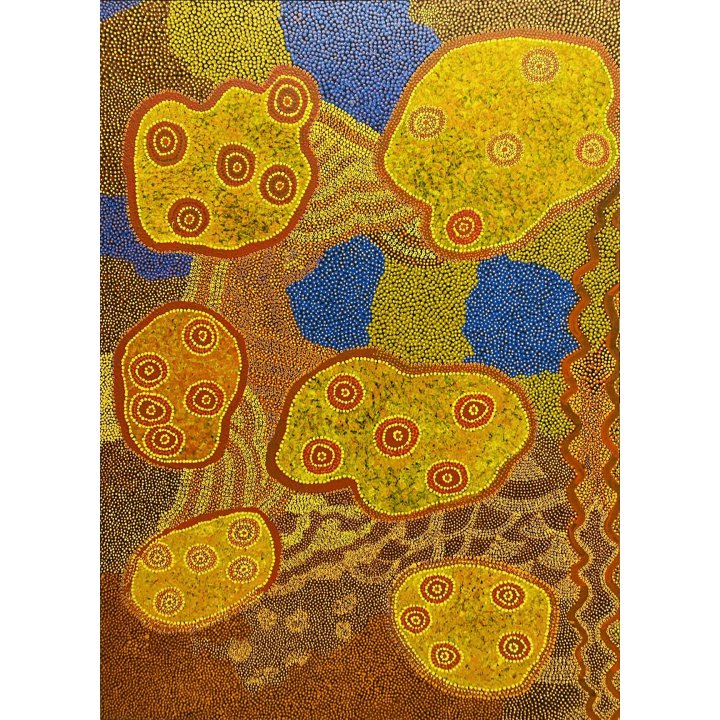 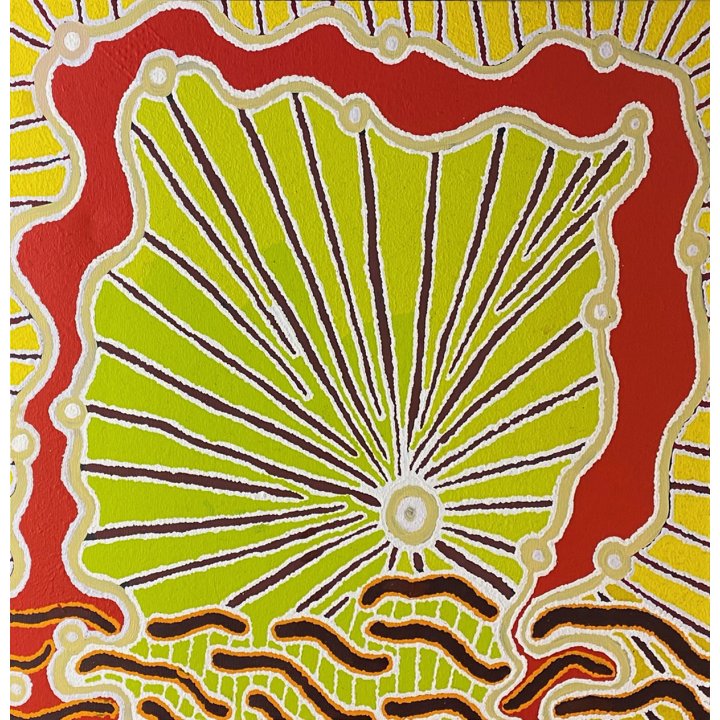