A RE-PRESENTATION OF THE 2013 EXHIBITION OF GULPILIL'S PAINTINGS

On 29 November 2021, news broke that Australia had lost one of its greatest creative talents, David Gulpilil Ridjimiraril Dalaithngu AM.

While many are familiar with his performing prowess after decades of international success as an actor and dancer, few knew that this brilliant and most charismatic of men was also an exceptional painter. We therefore wish to re-present from our archives a small exhibition we did of his paintings in Adelaide at our former gallery, Marshall Arts, in 2013. We dedicate this to David's memory in the hope that it contributes to people's understanding of just how remarkably talented he was, across multiple artforms. This is the story of how this great man and his works came to be in our gallery.

In 2013 the film director, Rolf de Heer, wandered into my gallery to ask if I’d be interested in exhibiting some of David Gulpilil’s paintings during the premier screening of Charlie’s Country during the Adelaide Film Festival. Here was this big-name director offering me paintings by one of Australia’s legendary actors! Trying not to appear like a star-struck schoolgirl, I said yes. I was hardly going to say no but I will admit to some apprehension because I’d never actually seen any of David’s art before. I knew he could act and dance like a god, but could he paint?

When Rolf dropped the paintings off, any doubts vaporised immediately. The four works were exquisite, and it was clear to me that David had a prodigious talent for painting. Unusually for an Aboriginal artist, David had used gold metallic paint and to great effect. I felt that I was gazing at precious illuminated manuscripts, and in a way I was; these were sacred stories from his traditional Country near Ramingining in Arnhem Land.

Each piece was evidence of his supernatural gift of movement; his lines contain the same grace and strength as his limbs and fine fingers as they danced across our screens. Just as he was able to project a magnetism through a camera lens that holds the viewer spellbound, so too does every mark on his canvas shimmer with his vital energy.

David didn’t give much away about the stories contained in the paintings. He didn’t want the sacred stories publicly recorded and he felt that anything he did give would be so superficial as to be meaningless, and to reveal its secret content would be a betrayal of his culture. The only information he provided was that they relate to his traditional country, Gulparil, from where he takes his name. The animals and objects depicted in the painting are symbolic of ancestral spirits and tools/weapons that shaped the land and gave the people Law, which is still followed today. The rest remains a mystery.

The day after the film premier, David and Rolf dropped into the gallery on their way to the airport. David was in a cantankerous mood and kept talking about how unfairly the film industry had treated him over the years. He was well-aware that his talent matched or exceed that of the Hollywood stars he had acted alongside but was paid only a fraction of their fees. As his emotions rose, he became angry about those who had deprived him of the wealth and mega-stardom enjoyed by his co-stars. He knew it was because he was black and between two worlds: the ancient and new; black and white. During this outpouring, Rolf – who David referred to as his long-time friend – was gently and patiently trying to calm a very agitated Gulpilil. But his anger was justified. The injustice was real and the heartbreak profound.

As they turned to leave, David took the painting, King Brown Snake and Blue Tongue Lizard at Gulparil Waterhole, off the wall. He was taking it back. Rolf and I pleaded with him to leave it, but David would not be dissuaded. Rolf was worried about how they would get a stretched work past airport security and onto the plane (David said he would cut it off the stretchers on the way to the airport), and I was trying to convince him to leave it so I could sell it for him. In retrospect, David made the right decision as the painting was really a work in progress and while good, it wasn't as strong as the other three. David went on to rework this piece up to the same exquisite beauty of the others and gifted it to the Art Gallery of South Australia.

Over the years Rolf and I have lamented David’s all too brief foray into serious painting. David had dabbled in painting previously, but it was for quick money selling through tourist shops or direct to the public.  In the past few years, I have seen a few of these paintings and there is no comparison. The four 2013 paintings are possibly the only paintings that show his true artistic talent. Without question these works are equal to his best performances. They are an insight into the breadth of his creative genius and provide a more complete picture of who Gulpilil was, culturally as well as artistically.

Given the absolute scarcity of works of this calibre, I expect the three works that remain in private ownership will become highly valuable collectibles. Those who will be able to say they own one of Gulpilil’s best paintings will belong to a very exclusive club, much like those who can say they own a real Leonardo da Vinci, except da Vinci was more prolific.

Gulpilil, you will always be remembered and revered for your enormous contribution to the arts. You were a giant among men. It was the greatest honour to exhibit your work and to meet you. I will certainly never forget you. 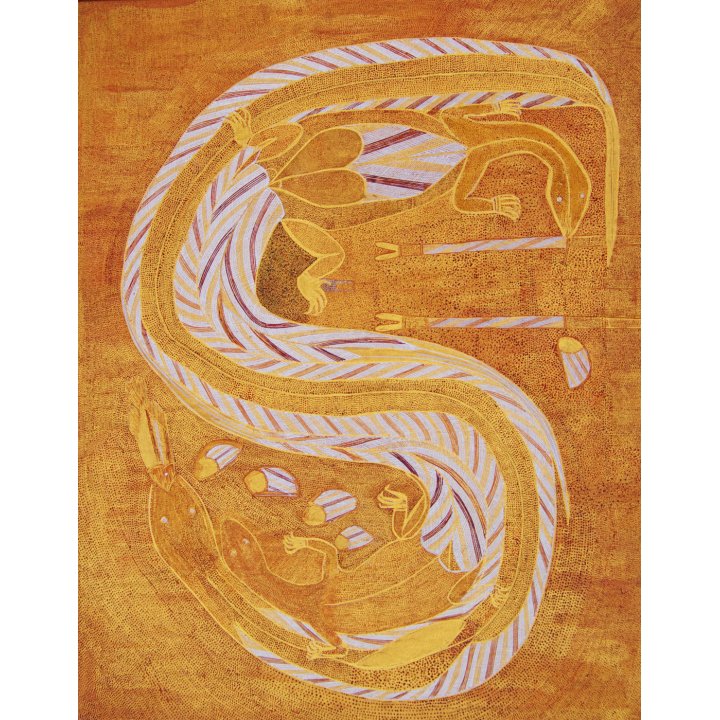 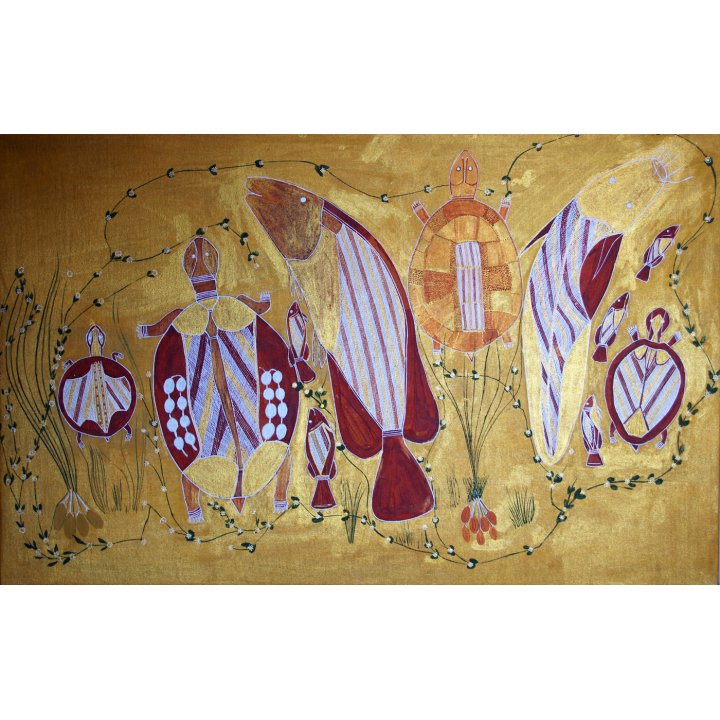 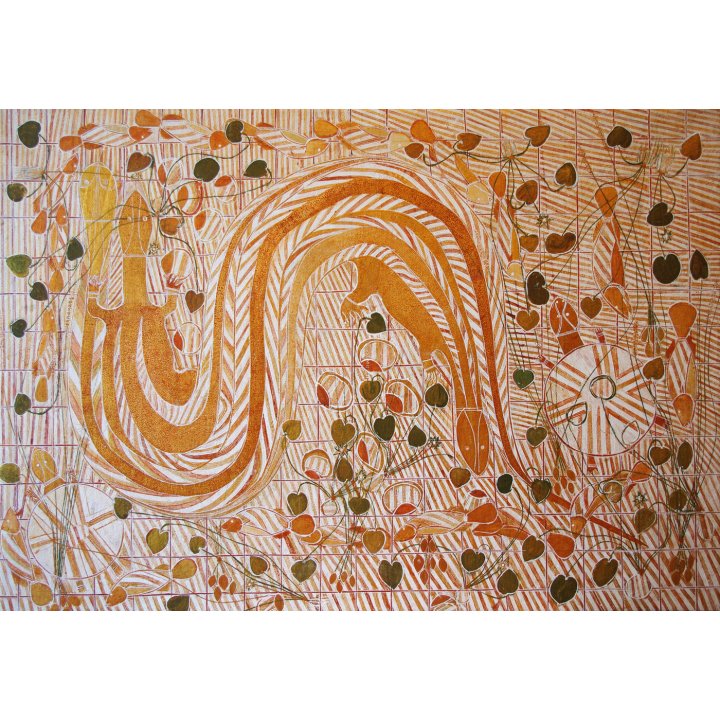 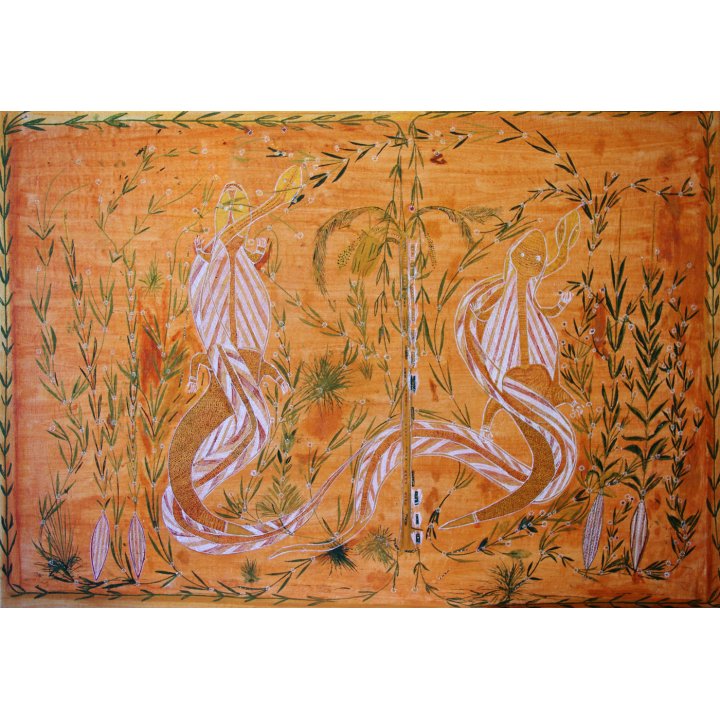 Work in progress. Gulpilil did more work on this piece and then gifted it to the Art Gallery of South Australia for their permanent collection. Visit their online collection database to view the finished work.
Cat. No. GZ/DG-work in progress