Illyampi Victor Burton is special. Very special. He is one of those rare individuals who come to painting late in life with not only a myriad of rich experiences, but precocious technical skills that the majority takes decades to master.

Burton was born in 1955 out bush, “creek area. Far south of Well 33”. Well 33 is north east from Newman on the Canning Stock Route in Western Australia, almost half way to Halls Creek. He has spent much of his life out bush and in his Spinifex Hill biography, Jigalong is often mentioned. (Jigalong is a small Aboriginal community around 165 km due east of Newman, was established in about 1907 to build the rabbit proof fence.)

In his early years, it seems that Jigalong became his anchor during an often nomadic existence, with his family more than once returning there on foot, even from as far afield as Port Hedland after they were relocated by the government. Burton was about 18 years old when he first wore clothes. He was given them in Marble Bar on his way back to his ancestral Country Punmu, west of Well 33, with family.

Punmu is the central theme of the works in this exhibition. It is dramatic country of vast plains, seasonal salt lakes and the imposing rocky outcrop of Punmu Hill, a sacred site associated with fertility (especially of twins). Burton’s depictions of his Country are breathtaking: vivid colours, glowing skies, and pulsating land formations. Each canvas bristles with a deep life-force. Despite only recently taking up the brush, his confident and accomplished execution suggest the hand of a much more experienced painter.

After contemplating his works for some time, I was struck and surprised by how much they reminded me of Egon Schiele’s angular, emotive figurative paintings (1890-1918, Austrian): Burton’s faceted rock faces and contorted perspectives exude a similar heightened sensibility for his subject’s subterranean psyche as Schiele had for his twisted, beautiful figures. Both artists manage to elicit a sense of awe and longing in the viewer.

And like Schiele’s sensual observations of the hidden curves and crevices of the human body, Burton’s landscapes reveal a deeply intimate knowledge of his geography. But where Schiele’s is an erotic exploration ended by his premature death, Burton’s is a profoundly respectful homage that comes from close and meditative observation over a lifetime. This is not the expression of an intense and fleeting desire, but an enduring love affair. Here he has more in common with the devoted and thorough approach of Giorgio Morandi (1890-1964, Italian), who returned repeatedly – reverently – to the same group of objects throughout his career. This mastery of subject matter leads to a superior state of understanding, where the painted subject becomes an extension of the painter’s consciousness and hence, identity.

Schiele and Morandi were born in the same year. It is interesting to think what Schiele might have achieved as an artist if he had had as many years to perfect his observation skills as Morandi and Burton had? Burton’s true artistic soulmate, however, is Albert Namatjira (1902-1959, Arrente/Australian). Namatjira’s watercolour landscapes of his Country west of Alice Springs are sublime. After looking at Rex Battarbee’s landscape watercolours, Namatjira knew he could better represent his Country than Battarbee. Like Burton, Namatjira had spent his life walking and living Country; he intimately knew every inch of it. The graceful flow of his mountain ranges and the purity of his ghost gums speak with the loving, knowing voice of a gifted insider that no outsider can ever hope to achieve. Battarbee may have looked but he could not see, for he did not possess the secrets to the land’s soul. Where Battarbee started with the exterior appearance of the landscape, Namatjira and Burton start with the Country’s spirit.

Namatjira was also a shrewd communicator; he well understood that non-Indigenous Australia would not appreciate the beauty and mystery of his Country if he painted it in the traditional Arrente manner. So too, Burton has chosen to speak to us in a visual language he knows we will recognise. We can look at his canvases and match them to remembered or photographed images of the places his works represent. We are ready to acknowledge unequivocally that Burton’s landscapes are representations of reality, whereas many struggle to accept the reality of Indigenous ‘really stories’ that are the central focus of abstract ‘dot’ paintings (‘really stories’ is an English expression some Indigenous people use to stress the Dreaming stories are real for Indigenous people). By communicating in the contemporary artworld’s standard for landscape painting, Burton allows us to literally see what he and his family hold dear, thereby bringing us one step closer towards a deeper appreciation of his culture as we begin to explore the stories that permeate the land.

And what incredible stories they are! Burton explains his central theme, Warlawurru (Punmu Hill) as:

"Eagle been sitting down, looking for more people for a feed.  He's eating children and kangaroo.  Wanti [women] might go there for a baby, on the West side [of the hill].  [The] Spirits looking out for [protecting] Mum."

"Warlawurru is the language name for Punmu Hill and also the Manyjilyjarra word for eagle hawk (likely a wedge-tailed eagle or brown goshawk).  Victor says the danger associated with this important place is a sort of cautionary tale that deters children from visiting there without adults.  It is also a place of fertility, especially for twins." [source: notes provided by Spinifex Hill Artists].

In addition, Punmu Hill is associated with Wati Kujarra, the story of two young lizard men travelling across Country. These songlines are important for helping people to remember the names of the waterholes that are essential for survival.

Other themes include the healing powers of Nyayartakujarra (Lake Dora, a seasonal salt lake); and Wirlarra, a group of salt water pools used for treating itches, cuts and sores. Wirlarra also means ‘moon’ in Manyjillyjarra. This site is connected to the story of the Moon protecting a family of dingoes with many young pups until they were able to continue travelling east towards Kinyu (Well 35), where they remained until the pups grew up. Pala-pala (lizards; also written Balla Balla) is a powerful men’s story of two lizards fighting and painting up in sacred red ochre in preparation for initiation into the Law.

Above all, Burton’s paintings are an amazing gift. He is taking us gently by the hand and presenting not only the breathtakingly beautiful natural wonders of his Country, but he is connecting us to the Indigenous significance of these places in a language we understand; he is effectively joining the dots so that we can witness the soul of Australia. This revelation of the essence of a thing is what all great artists have done since time immemorial. For Burton, this exhibition represents the beginning of a prodigious artistic journey underwritten by a lifetime of profound cultural and geographic knowledge. For the viewer, we are being handed an invitation from a very special emerging master to experience Punmu Country through Indigenous eyes. We suggest you accept! 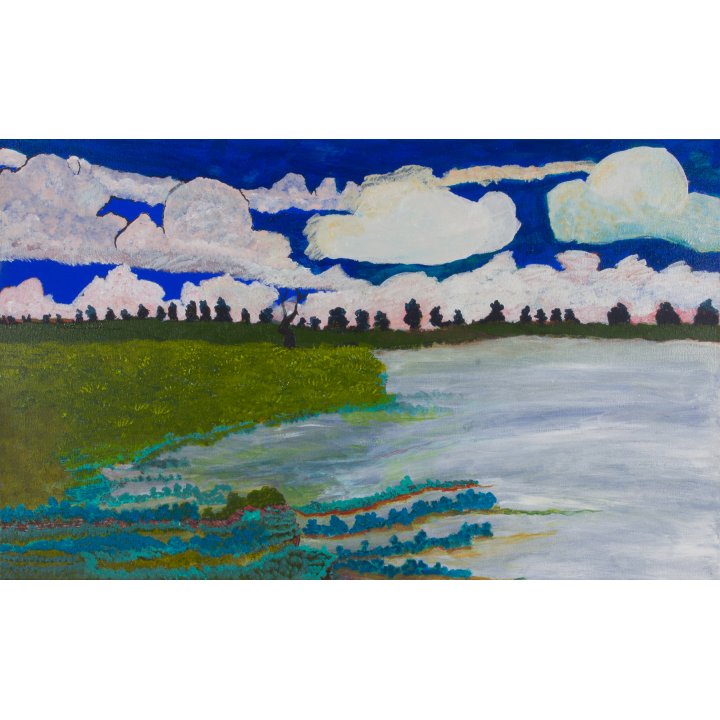 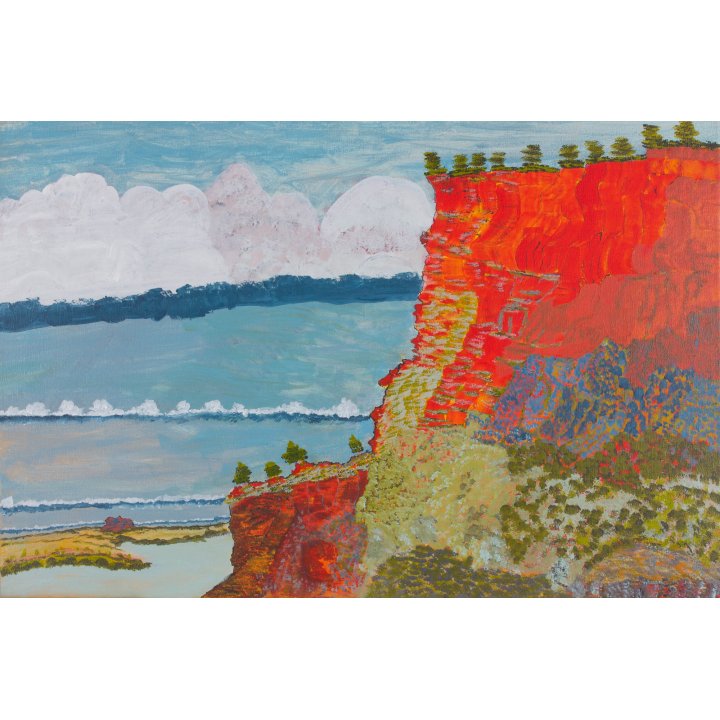 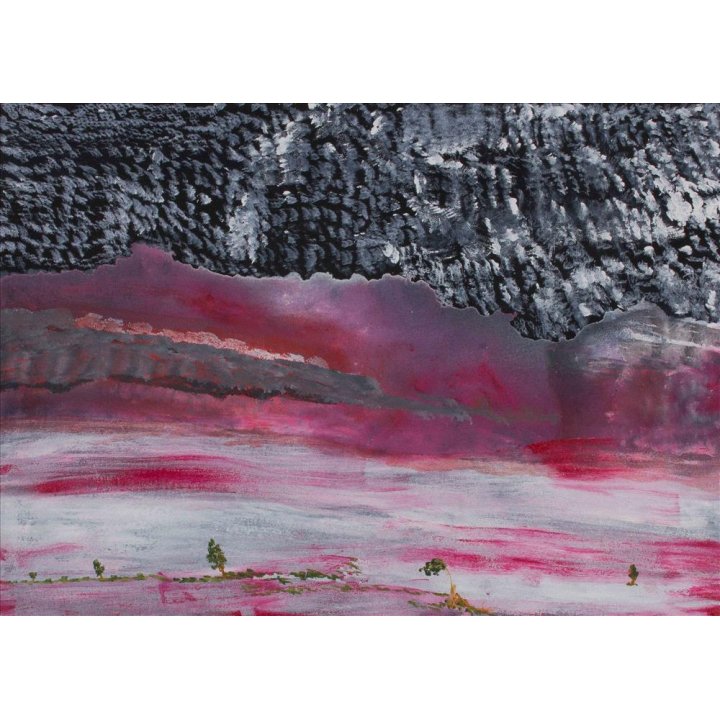 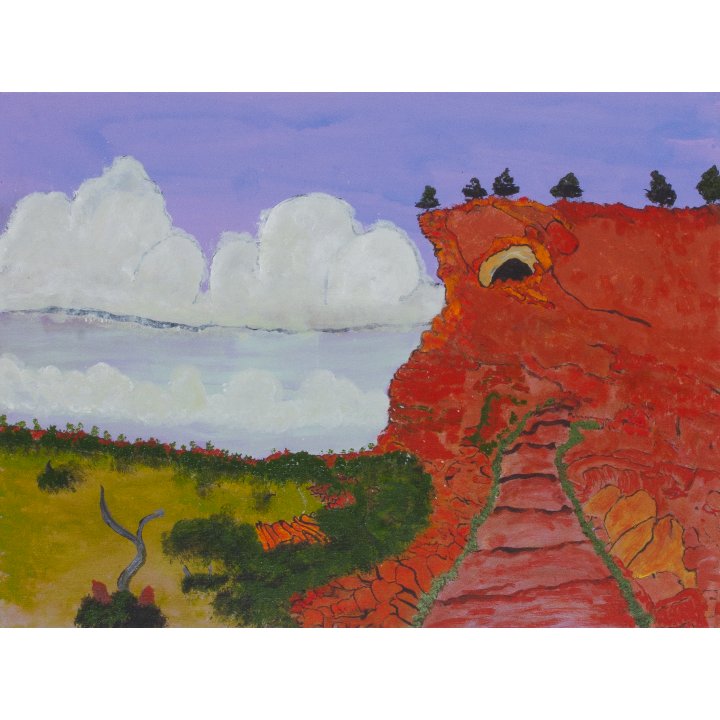 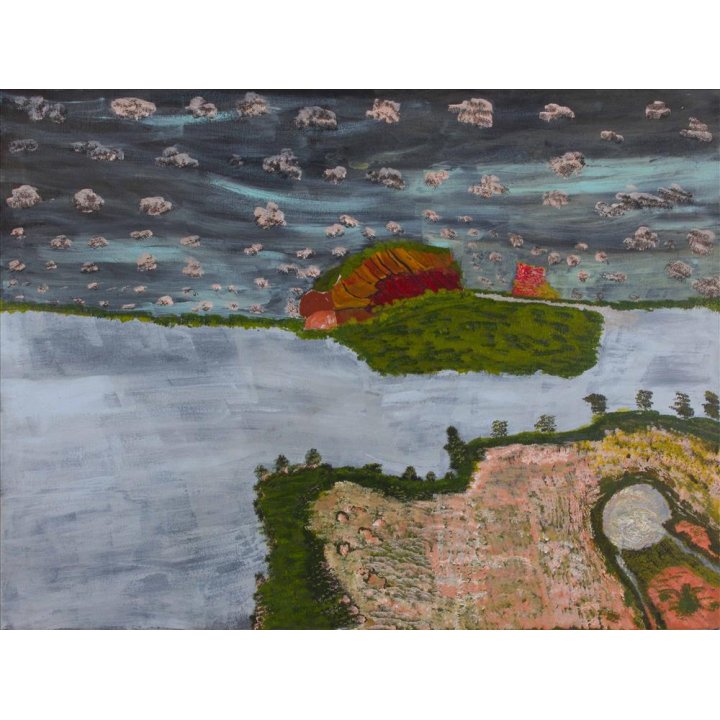 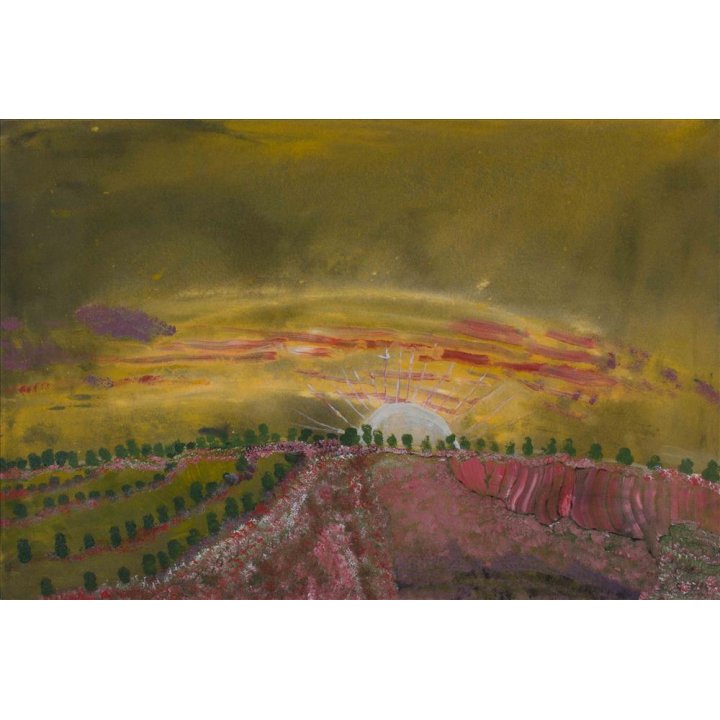 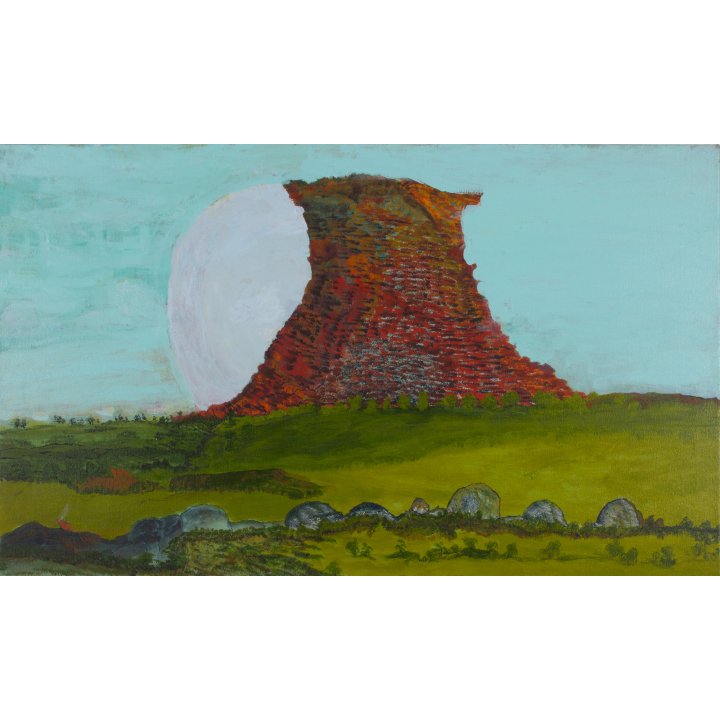 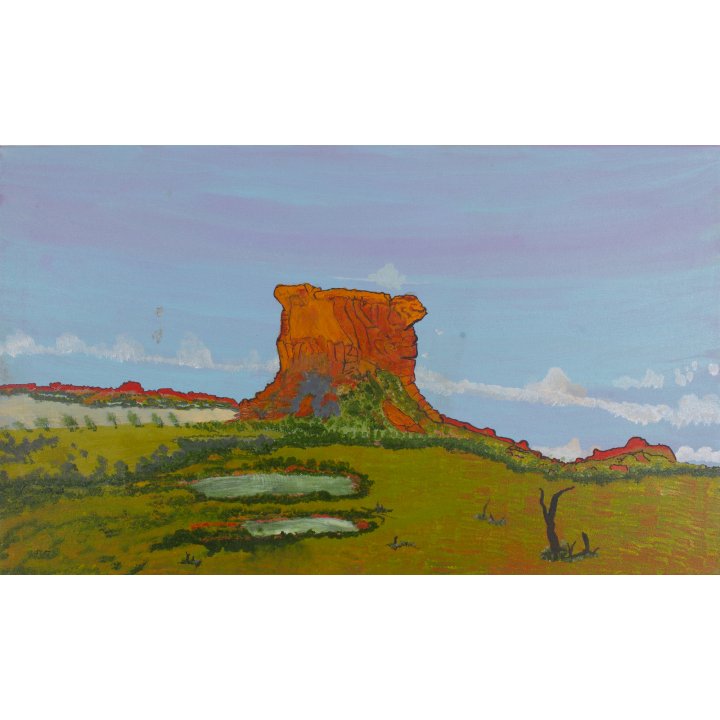 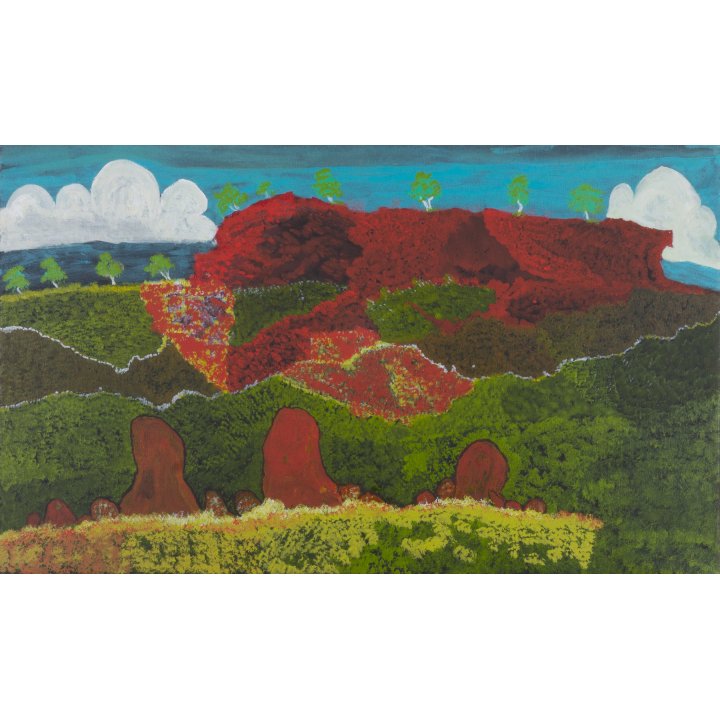 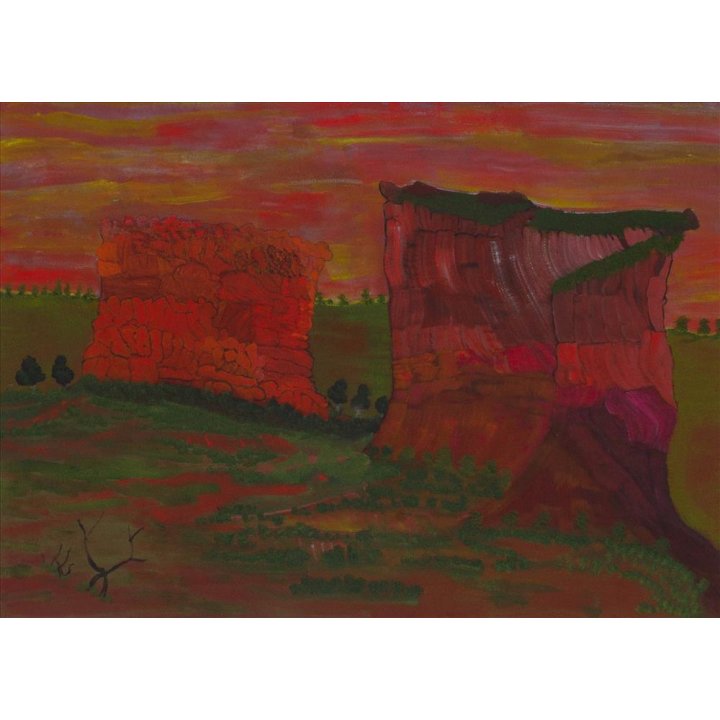 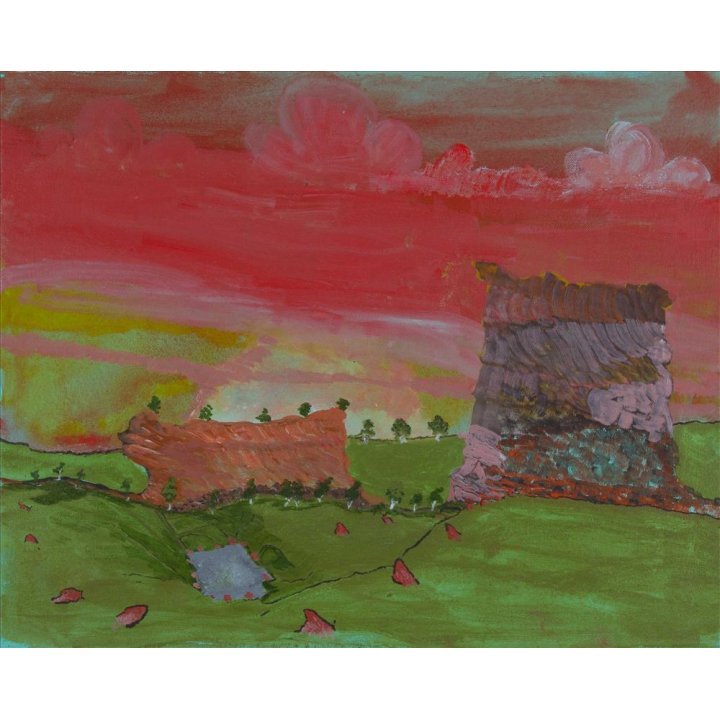